The artistic and technical challenge of producing sixteen-or-so minutes of original animation to accompany Britten's Young Person's Guide To The Orchestra should not be underestimated.  We've already established this musical tour of the orchestra will align with an exploration of a 'Kingdom of Sound', wherein the orchestra equates with a fabulous metropolis, and its instrument groups with distinctive 'districts' within the city. We're starting to get an impression of what some of these districts may look like, thanks to the ongoing YPGTTO Speed Paint Challenge, which has seen the students, alumni and staff of Computer Animation Arts create quick, instinctive digital concept paintings of the  various musical zones.

So far, so speculative and exciting, but experience tells us that sixteen-or-so minutes of disembodied fly-throughs could pall pretty quickly, leaving audiences restless and disengaged. In addition to the 'kingdom of sound' concept, we needed to identify an additional narrative element - a character or characters - by which to personalise and specify the journey for audiences.  By 'character', we don't mean humans, but rather thinking about the ways in which musical notation itself might be anthropomorphised suitably.


We're thinking birds - or rather musical notation behaving like birds, the similarities between groups of musical notation gathering along staves and groups of musical creatures gathering on telephone wires being satisfyingly self-evident.  We're imagining a moment in the earliest section of the piece when the musical notes corresponding to the principle theme of YPGTTO are somehow 'let fly' from their staves, to take to the air as a flock, to soar and to murmurate, to lead the audience on their journey through the kingdom of sound. 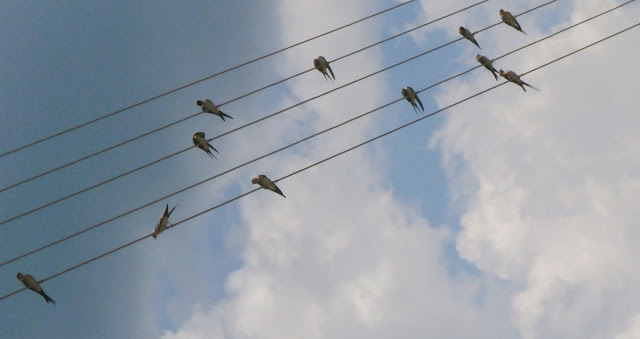 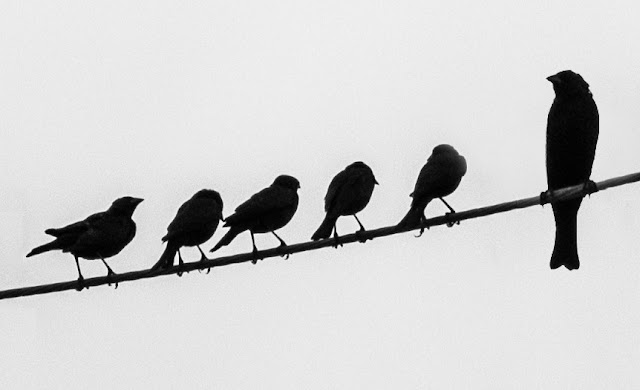 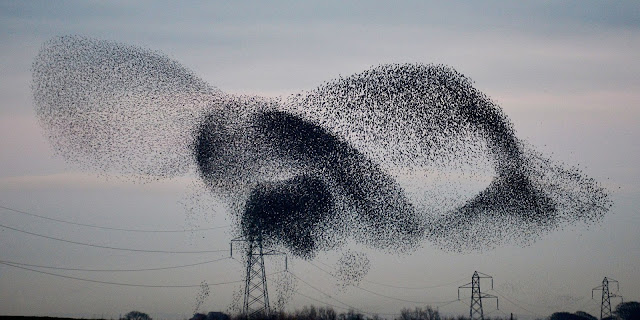 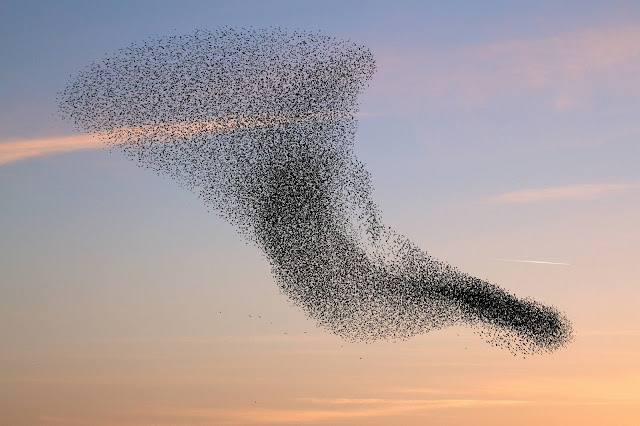 We're sure that we don't want the musical notation to 'be' birds, but rather behave in bird-like ways.  We want to flirt with abstraction throughout the YPGTTO film, encompassing sequences wherein our cities become experiences of light, shape and activity before coalescing again into discernible structures and spatial relations.  A couple of references came immediately to mind in terms of dealing with the idea of treatments for the notation flocks: the Beethoven's 5th section in Disney's Fantasia 2000 and most usefully, Norman McLaren's Le Merle, in which very simple abstract shapes combine over and over to perform the bird-like behaviours of McLaren's titular creature.

Our discussions in regards to using the flock of musical notation as a device within the YPGTTO animation have included ways in which we might be able to single out a particular character (or characters) amongst the many as a further means of engaging audiences for the sixteen minute duration.  Fantasia 2000 provides another useful reference here; during the admittedly bizarre sequence where all the whales levitate out of the sea and fly towards the midnight sun, the narrative focuses on a fearful whale calf who gets separated from his parents, before rejoining the rest of the whales at the animation's climax.  We're thinking that one - or some - of the musical notation elements might perform a similar role, in so much as it gets separated from the rest of the flock and explores the various cities from a more subjective point-of-view.

One of the challenges of structuring this animation is how we can hold back the idea of the 'kingdom of sound' at the beginning of the film, but also initiate audiences into the metaphor itself.  YPGTTO begins with the full orchestra playing the complete theme that is later deconstructed by the various instruments groups.  I've always thought of this first section as functioning like an over-view of the whole world we will later be visiting, rather like one of those 'You Are Here' maps at the front gates of amusement parks. Various similes compete for precision; does this first piece equate to an orrery - a complete first over-view of something more complex? Or is it the unveiling of some great map or diagram of the Kingdom of Sound?  CAA student Vlad Yankov's speed paint response to this first section of YPGTTO gets close to what I'm seeing; a diagrammatic representation of an entire world; a schematic, or blue-print - and definitely an ariel view, as if the audience is held high above the terrain.

So what does this 'map room' or observatory look like?  We're not sure, but our imaginations are flirting with something circular or planetarium-like - something architectural, and something too with the quality of an antique architectural drawing or architectural model: are we looking at a miniature 'occlusion pass' version of the kingdom of sound in the centre of a dome, the inner surface of which is papered with the YPGTTO score?

Something we do know is that the YPGTTO Map Room sits high above the Kingdom Of Sound it describes.  We know this because the second piece of Britten's YPGTTO focuses on the flutes and everything about the music suggests a descent of some kind.  The piece is ethereal and floaty and it encourages us to imagine our newly-released flock of musical notations spiralling down past the topmost towers of the flute district...

So maybe the floor of the Map Room winds open, iris-like, at the conclusion of YPGTTO's first theme to reveal the world below...

Having cited what is ethereal about YPGTTO's flutes, the skydiving scene from Gareth Edward's Godzilla (2014) is a contradictory reference, but there's something about the height, scale and POV of some of these shots that resonate in terms of how we might ensure the audience for our animation experiences a similar sense of the cinematic.


Some gentler references now as we continue to think about how those musical notation marks might spiral their way down through the 'moon door' of the Map Room, in the same way perhaps that sycamore seeds helicopter towards the ground or like the unhurried flight of a dandelion seed?

As we listen to 'The Flutes', and think more about the descent of our musical notation characters from the map room above, the impression that we're seeing them descend past an ariel architecture of flute-inspired spires becomes irrefutable...


... likewise the sense that we're beginning our journey into the Kingdom Of Sound at the first break of day, the towers of The Flute District shrouded in clouds and in the mists of the morning.

I'm reminded of the Venice paintings by Thomas Moran; their soft golden impressionism has exactly this mood of our first glimpse of The Flute District, as we follow our notation characters in their unhurried descent to the earth.

So now to put some of these impressions to work!
Posted by tutorphil at 06:38 1 comment: 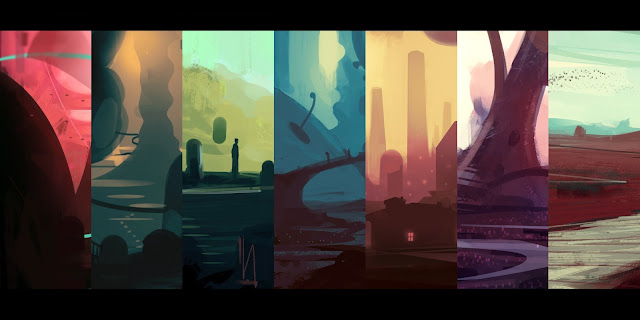 Posted by Jordan Buckner at 05:26 No comments: