As Phil pushes ahead with script development, I've been exploring some concept design. We plan to have a ready robust animatic, with a great set of keyframes. But before this, we really need to tie together the design for each part of the world. This first set of thumbnails explores our first act, the opening room in which our characters are propelled. As Phil puts it;

The Overture reminds the viewer of many places: it’s partly like an enormous airport, train station or spaceport because it’s very busy with streams of musical notes who are travelling this way and that on what look to be like escalators and conveyor belts.  There are lifts going up and down too.  There are arrow-shaped signs with destinations on them:  we see signs for ‘The Wind City’ and ‘The Brass City’ and ‘The String City”.  We see departure boards too for destinations such as ‘Piccolo Piazza’ and ‘Timpani Towers’.  We’re reminded too of an enormous sorting office or distribution centre.  Everything is moving and busy.  Everyone is on their way to somewhere else.  This place is huge! The other thing we notice about The Overture is that it is monochrome: it’s not a cold or depressing place – rather it is warm and inviting like we might consider hand-made paper to be.  Indeed, it’s more artisan and ‘early cubism’ than too keenly graphical or stark black and white. 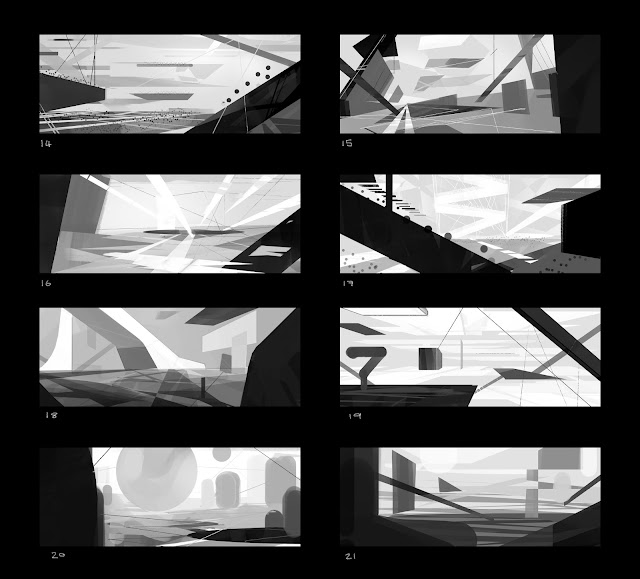 Some of these sketches are heading somewhere...nothing too magnificent yet, but the train is moving. The works of legendary architects like Zaha Hadid, Lebbeus Woods or Daniel Libeskind are certainly an inspiration. To create a grand, almost abstract space to emphasis the complexity of travel to this new world. A place buzzing with activity. With stairs and doorways to fresh parts of the city. In the same way that airports and train hubs seem like amazing gateways to new possibilities, this should feel alive with dimension and adventure.

Hopefully this begins some discussion on this specific area. It is currently developing away in the background. Meanwhile, I'll be jumping aboard the character design train. Trying to work out what our murmurations will look like and how the characters will work as one.
Posted by Jordan Buckner at 11:58