To create the flipping text for the destination board I went into After Effects, created a grey panel, and centred the letter I wanted onto it. After pre-composing these two layers (the grey panel and the letter) I added an adjustment layer to brighten it up a little bit to create the Top of the flipping panel. I then duplicated both of these layers in the Project panel to create the Bottom, where I flipped the letter vertically and removed the adjustment layer so it was darker than the top. I then duplicated the 'Top' composition and replaced it with the duplicate with the 'Bottom'. Next, I created a mask to cover half of the Top composition so the Bottom would show. The Bottom composition was then turned into a 3D layer and animated the rotate so it rotated 180° - I had to play around with where the anchor point was for this to get it right although it could still use some adjusting. 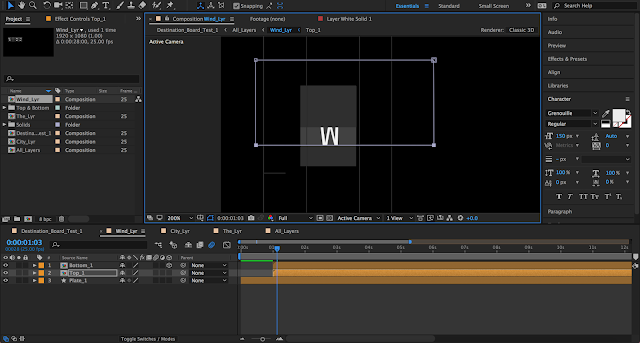 After this, I went into the Bottom composition to moved the letter's keyframes so it'd only show up in the animation after the panel had rotated past the centre of the Top panel (so the upside down letter didn't show when the panel hasn't flipped yet). I then duplicated these to create the other letters and offset the animations so they didn't all flip at the same time. I still need to sort up adding more letters so the words go from things like 'Boarding' to 'Departed' or change to different cities. I also think I can make the letters flutter to give a blurring effect for a while before settling by duplicating the flips, animating them faster, and adding some motion blur. I'll continue to test this out and see where it leads me. 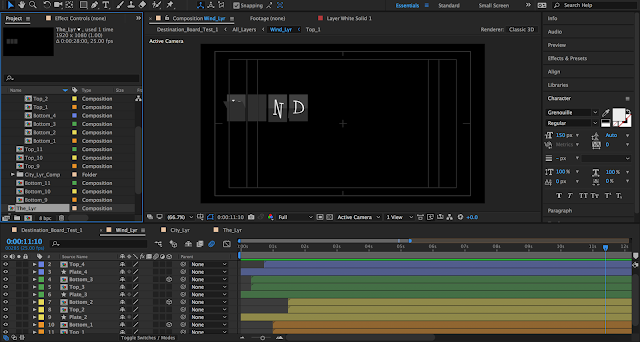